You can see mainly the nationally designated historical site, the largest tomb in Japan, and the Tsukuriyama Kofun Group. Around Arashima Station, there are a lot of tombs in the Yayoi and Kofun era.

Four places of Chusenji, Miyayama, Shiotsuyama, and Tsukuriyama are maintained as parks. Collectively, it is called Kodai Izumo Ouryo-no-oka (ancient Izumo king’s mausoleum hill).
You can easily visit the tomb. Chusenji park and Miyayama park have king tomb in the Yayoi era, and Tsukuriyama park has four tombs, including flat-topped burial mound and rectangular-shaped ancient tomb.

From the top of the mound which the elevation is about 50 meters, you can see the Shimane Peninsula, including the nakaumi, and you can enjoy a magnificent view. Set in a mysterious tomb group, it will lead you to the world of Kunibiki-shinwa (land pulling myth).

Large Tomb Zone: The Beginning of a New Era

Around the second half of the third century, countries were combined from Kyushu to Tohoku region, centering on the Yamato government. A huge grave equal ancient tomb, it calls Kofun.
The arashima region’s tribes have welcomed the dawn of new era as a leader of the Izumo region, and since then they have built large tombs on these hills of the main tomb overlooking the Nakaumi.

It is a huge tomb with 60 meters built in the early Kofun era.
The pit-type stone chamber in the center was the highest-quality burial facility of that time and was built with excellent civil engineering techniques such as wastewater measures.

– The largest tomb in Japan –

The tomb is the largest tomb in Japan in the early 100 years of the Kofun era, along with the Tsukuriyama Kofun.One side is 60 meters, height 5 meters, it has secound tier.
The size of the power of wealthy family buried in shows big because a lot of people are mobilized and it was built.
It had a splendid pit-type stone chamber from the Tsukuriyama tomb, and some excellent burial goods were excavated. The excavated items are displayed in the Tokyo National Museum.
From the square in the park, you can see the nakaumi and Shimane Peninsula, and you will be led the world of Kunibiki-shinwa (land pulling myth).

– The head tombs lined up-

When Queen Himiko of Yamataikoku put sent a messenger to Wei of China, there were a small states in various places such as Izumo, Tsukushi, Kibi, Yamato, Echigo (hokuriku), and Owari; and each had its own culture.
The King of Izumo made the country symbol which is Izumo-style tombs covered with a heap of earth, whose four corners are protruding tombs outward. This tomb extends to the kings of Echigo. The four-cornered protruding tomb in Ouryo-no-oka (ancient Izumo king’s mausoleum hill) is a evidence of phantom exchange through the Sea of Japan.

– The largest four-corner tomb in the eastern part of Izumo

No.6 and No.10 tombs of the Shiotsuyama tomb which size is  over 30 meters, and 40 meters including its protruding, are the largest four-cornered protruding tomb in Shimane.
There is a large one also in the Nishitani tomb group in Izumo City, and it is considered that there was a large force in the east and west of izumo district in the latter half of the Yayoi era. No.1 tomb was the first tomb built on this site, and it has the characteristics of the four-cornered protduing tomb. From the mound, which was restored to its former form, you can see the magnificent Mt.Daisen.

It was originally a group of tombs consisting of 19 , but now two four-cornered protuding tombs are preserved and maintained.

Tombs of NO.8-10 are medium-sized (18meters, 27meters including the protruding) four-cornered protruding tombs.
A coffin was lay in these tombs at the top of the mound, and the remains were mourned. Moreover, earthenwares of the latter half of the Yayoi era were excavated.
This tomb group was discovered in the Showa 40’s (1965-1975) and spread the existence of the four-corner protruding tomb.
Tomb Burial No. 9 (Yakumo-tatsu Fudoki-no-oka)

~ Lost the most beautiful sticked stone –

This is a group of tombs with centering on two tombs with four-cornered protruding, and No. 3 is a large four-cornered protruding tomb of 30 meters of one-sided, built in Yayoi era.
The elaborate structure that sticks a large sheet stone on the slope, and surrounds secound tier of masonry around the edge is a feature of Izumo region.
Now, a miniature model of the stone is restored next to the residential estate.
Stone of No. 3 Tomb(Yakumo-tatsu Fudoki-no-oka)

No.1 tomb (annihilation) is the second largest rectangular-shaped ancient tomb with a total length of 60 meters in Izumo.

No.4 tomb is a medium-sized (18meters, 30meters including protruding) tomb that was built in the late Yayoi era. 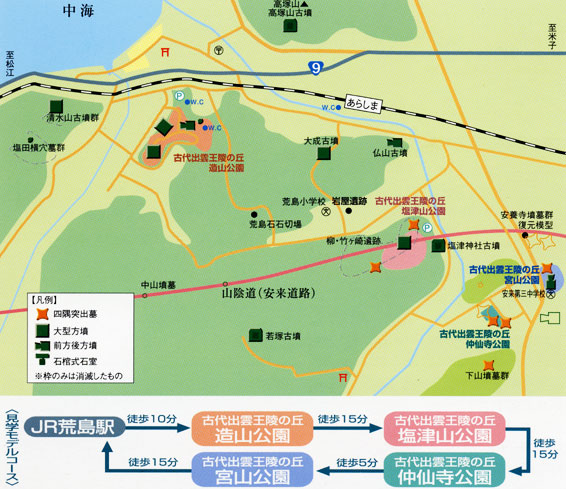